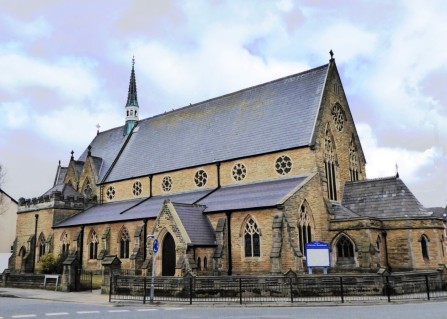 Compiled from archive material from the church, including extracts from the memoirs of Mr W.E. Tyson, a former Churchwarden, and a history of St Nicholas’ created by members of the congregation to celebrate the church’s centenary in 1974.

The congregation of St Nicholas’ 2018 owe a considerable debt of gratitude to our predecessors, who not only kept the church archive meticulously, but took such pains to document the early years of the church and indeed, to bring them so vividly to life.  Read on…..

The history of the later years of the Parish of St Nicholas’, covering the period from the 1850s to the first decade of the twentieth century, clearly shows its development from two very different roots: the settled, largely working class population of Little Brighton, later Brighton le Sands, to the south, for whom St Barnabas’ School in what is now Warrenhouse Road was also their place of worship, and the more recent influx of the wealthy merchant and professional classes for whom the new suburb of Blundellsands began to be developed during the 1860s and for whom the Iron Church and then the current church were erected in the early 1870s.  Read on…..

Parish records reveal many tantalising glimpses of the effects of the two world wars on St Nicholas’ Church and the surrounding area. If the written record is intriguing, however, the physical testimony is deeply moving. The desire to remember and to commemorate the sacrifices of both wars ran deep within not only the regular congregation but the wider community, and for many, the church building itself and its contents presented a fitting and personally consoling means of permanent remembrance.  Read On…….. 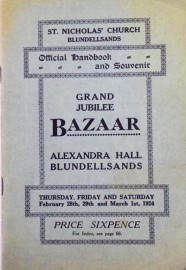 In 1924, St. Nicholas’ Church put on a three day bazaar in Alexandra Hall, Blundellsands to raise money for the church.  Here is the Official Handbook and Souvenir

If the first decade of peace had been dominated by the lingering shadow of war, the second seems to have been dominated by other concerns. The Great War, while still the subject of yearly commemoration, no longer appears to have framed the terms of everyday life quite so insistently, while even late in the decade, any sense of the approach of a further conflict seems largely absent from parish records. Read on…..