The Higson Memorial stained glass window and plaque are located on the north side of the Church, next to the entrance to the organ loft.

The window shows Our Lord talking to a very attentive Mary, whilst her sister Martha (known to always be a hardworking lady) looks on with a basket, apparently containing bread, held under her right arm. Above these images are four (4) cherubs. Above the cherubs are the letters ‘A’ for Alpha, the beginning and ‘O’ Omega, the end. The window is topped with the image of a white dove, depicting peace.

Along the base of the window can be seen the dedication:

‘TO THE GLORY OF GOD AND IN MEMORY OF OUR DEAR MOTHER SARAH ELLEN HIGSON WHO DIED ON 29th NOVEMBER 1893’.

The plaque adjacent to the window is a 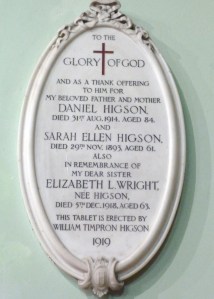 also dedicated to members of the Higson Family.

The Higson family became well known in Liverpool for their work in the licensing trade and as the founders of Higson Breweries.

Annie bore 7 children during their marriage, a son William Marsh Higson, born 1880. He died on 9th April 1917 during active service in the First World War during the battle of Arras, France whilst serving as a 2nd Lieutenant in the Kings Own (Royal Lancashire Regiment). William’s body is now interred at the Duisans British Cemetery, Pas De Calais, Northern France, plot number II.B1. 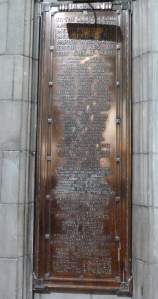 William is remembered on the brass memorial plaque at the back of Church, in the Waterloo Rugby Club and on the Civic Memorial in Crosby.

One of William’s brother’s, Daniel Higson, born in 1881 and died in 1954, married Isobel Mary Lyle, born in 1885 who died in 1973. They lived at ‘Troutbeck’, Serpentine South, Blundellsands. During the First World War, Daniel served as a 2nd Lieutenant in the Royal Garrison Artillery and saw active service in France as a gunner. Unlike his brother, Daniel survived his war service and on his return continued to work in the licensing trade.

During the period of the Second World War, Daniel, a member of ‘The West Lancashire Golf Club’, became the Club Captain during the period 1939 to 1946, using his own home to conduct Club business as the clubhouse was requisitioned to accommodate The 66th Anti-Tank Regiment.

The Higson Family will always be remembered in our Church as a family who not only made sacrifices during the First World War, but were valued members of the congregation and an integral part of the community of Blundellsands for many years.